Included in this document:

The number of vaccines on the CDC’s recommended vaccination schedule for children under the age of 2 increased from 10 to 36 after Congress passed a law (The National Childhood Vaccine Injury Act of 1986) in 1986 preventing vaccine-injured citizens from suing the vaccine manufacturer responsible for the production of the vaccine.

By 2010, the U.S. Court of Claims had awarded nearly $3 billion dollars to vaccine victims for their catastrophic vaccine injuries (including autism), although two out of three applicants have been denied compensation. (source)

Meanwhile, the global pharmaceuticals market is worth $300 billion a year, a figure expected to rise to $400 billion within three years. Companies currently spend one-third of all sales revenue on marketing their products – roughly twice what they spend on research and development. (source)

The US and New Zealand are the only countries in the world who allow pharmaceutical companies to advertise their products on TV. Government agencies (CDC, FDA, & AMA) have monetary ties to drug companies and blatant conflicts of interest. For example, GlaxoSmithKline and Pfizer are owned by the same financial institutions and groups that own Time Warner (CNN, HBO etc.) and General Electric (NBC, Comcast, Universal Pictures etc.). This is seen throughout all of the major vaccine manufacturers and all of the 6 corporations that control our mainstream media. 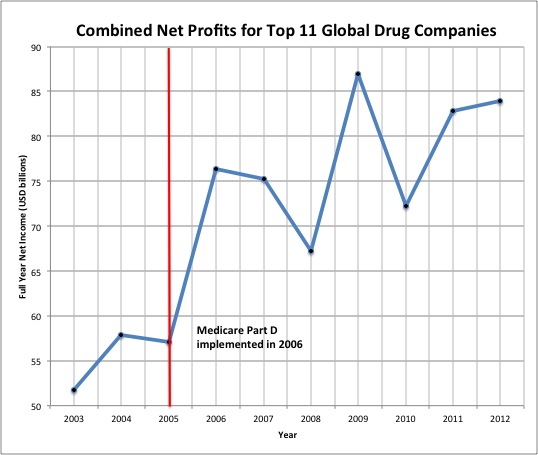 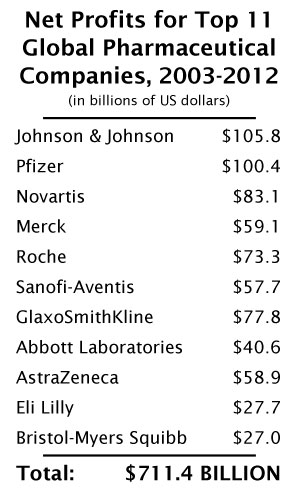 2. Growth Mediums: Viruses need a medium in which to propagate or reproduce. Common broths include:

3. Adjuvants: Stimulates immune system in a nonspecific manner, leading to increased antibody levels with minimal antigen, leading to the use of a reduced number of injections.

5. Stabilizers: Used to inhibit chemical reactions and prevent vaccine contents from separating or sticking to the vial.

9. Contaminants: Vaccine may also contain dangerous unintended substances, such as carcinogenic monkey virus SV-40, found in some polio vaccines and HIV was discovered in early hepatitis B vaccines. (source)

CDC List of Ingredients In Each Brand of Vaccine:

Did you know that:

1. Children not all biologically identical. The current one-size-fits-all approach to vaccination does not take into account differences among children’s genetic profiles or immune responses based on factors such as age, weight, and overall health status. 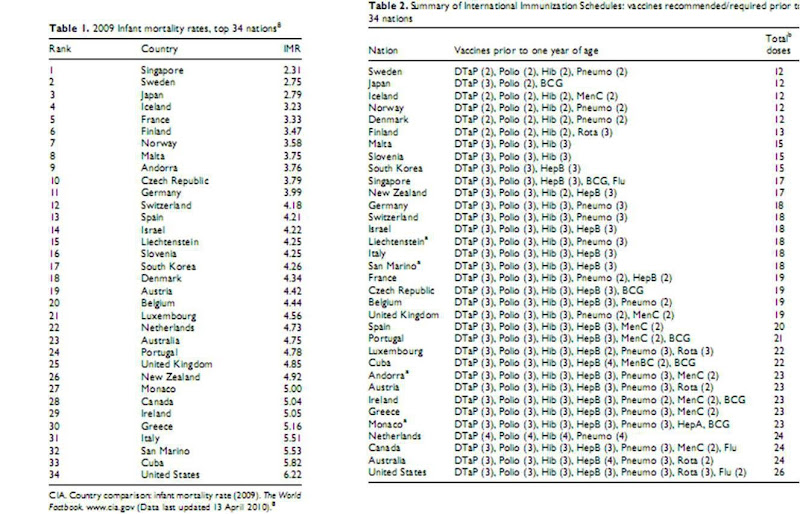 3. Babies receive several vaccines at once—they may receive 8 vaccines or more simultaneously at a doctor visit (between 2 and 15 months of age). Vaccine “layering” may increase the risk for a serious vaccine reaction. There has never been studies done to determine the safety of the several vaccines doses given at the same time.

4. Vaccines have not been adequately tested for safety using methodologically sound scientific studies, so their long-term health effects are unknown. Pharmaceutical companies have financed nearly all vaccine research to date, which introduces enormous bias. Studies that have been done are manipulated in such a way that the company’s desired results are guaranteed: http://vactruth.com/2013/09/26/how-pharmaceutical-hide-dangers/. Furthermore, to date today, there is not a single study on the safety or effectiveness of the current CDC vaccine schedule for children.

5. Vaccines contain many known and confirmed carcinogens and neurotoxic ingredients including: thimerosal (mercury) and aluminum. (See Vaccine Ingredients section above). These ingredients have a cumulative effect and can cause serious toxicity problems.

6. Some vaccines are associated with a higher number of serious health problems, both immediate and delayed, yet healthcare professionals rarely report vaccine adverse events. Every year, more than 25,000 adverse reactions are reported to the government, including irreversible injuries and deaths. It’s been estimated that this represents only about 1 to 10 percent of total vaccine reactions, which means that millions of people may have suffered vaccine reactions and injuries over the past few years.

7. Vaccines do not provide complete or permanent protection against infectious disease. For example, 75 percent of children who contracted chickenpox in a 2001 Maryland outbreak had been vaccinated against chickenpox. A high number of vaccinated persons (around 80% in all cases) also have been found in pertussis, measles and mumps outbreaks. Also, the live virus vaccines (MMR. polio and varicella) can cause the disease itself and sheds from the vaccinated individual, which can infect people around them.

8. Preventing natural immune responses to environmental pathogens may not be in your child’s best interest. Healthy children receive life-long benefits from naturally occurring immune responses. When children are born, they develop natural immunity to a large variety of microorganisms that they breathe, eat, and touch. The immune responses by cells lining their airways, skin and intestines, are very important in creating “memory” and protection against the organisms they naturally come into contact with. Natural immunity involves infection through the mucous membranes, which is where the cell-mediated immunity comes from. That primary line of defense is a very important step in the maturation of your child’s immune system—and it’s bypassed when he/she gets a vaccine. Vaccines do NOT impart long-term immunity because they don’t create the kind of memory that occurs when you go through the process of a natural immune response. And natural exposure does not necessarily lead to infection—it is possible to obtain natural immunity without actually getting sick, if your immune system is robust. Most “vaccine-preventable” diseases are easily treated with modern medicine and antibiotics.

9. Herd immunity is a myth. In the original description of herd immunity, the protection to the population at large occurred only if people contracted the infections naturally. The reason for this is that naturally-acquired immunity lasts for a lifetime. However, vaccine-induced immunity lasts for only a relatively short period, from 2 to 10 years at most, and then this applies only to humoral immunity. Then boosters were suggested for most vaccines, even the common childhood infections such as chickenpox, measles, mumps, and rubella. However, the boosters only last for 2 years or less. This means that at least half the population, that is the baby boomers, have had no vaccine-induced immunity against any of these diseases for which they had been vaccinated very early in life. In essence, at least 50% or more of the population has been unprotected for decades. If we listen to present-day wisdom, we are all at risk of resurgent massive epidemics should the vaccination rate fall below 95%. Yet, we have all lived for at least 30 to 40 years with 50% or less of the population having vaccine protection. That is, herd immunity has not existed in this country for many decades and no resurgent epidemics have occurred. 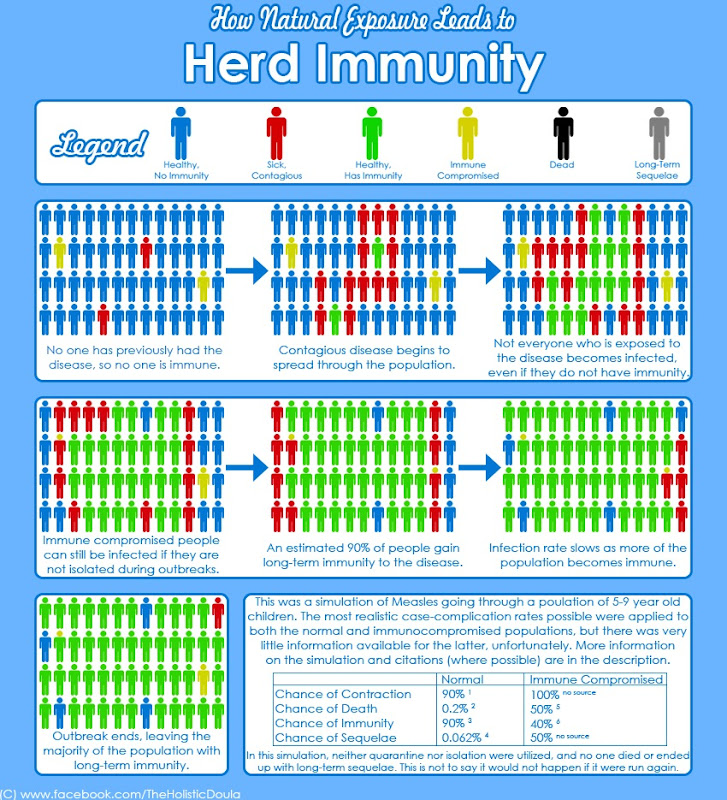 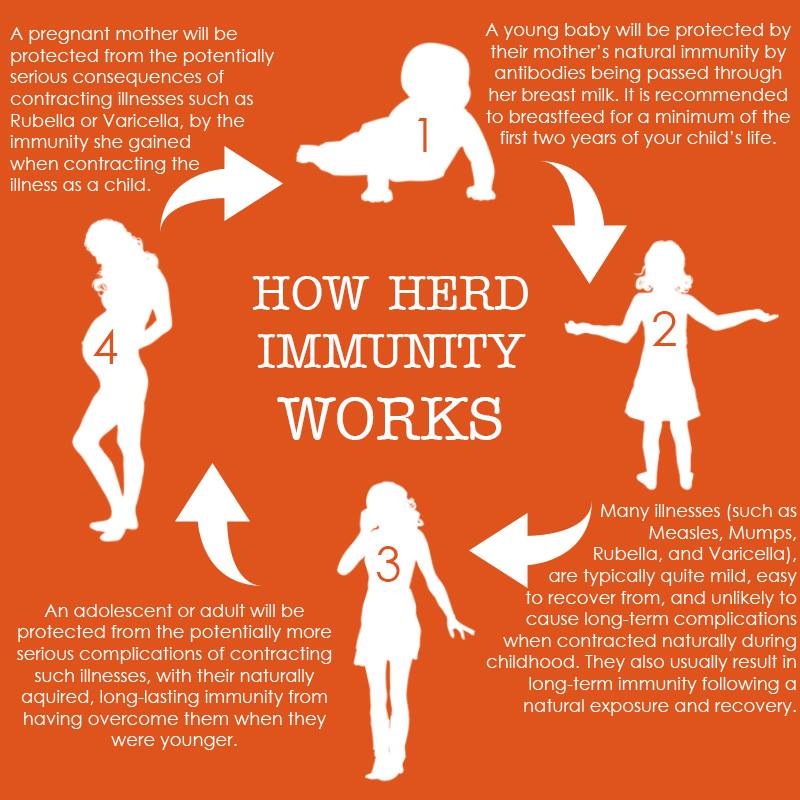 10. Vaccines are not solely responsible for the eradication of diseases. In most cases, the vaccine for a specific disease was introduced after the rate of infection had already dramatically decreased in the population. The actual cause for the decrease in disease is due to the sanitation laws which improved living conditions and overall health.

11. Vaccines may contain excitotoxins that disrupt a child’s immune system (through microglial overstimulation) and damage developing brain structures, which raises his/her risk for a wide range of diseases, including autism, learning disabilities, and psychiatric disorders. New research gives evidence for a link between the high number of vaccines and the autism epidemic. 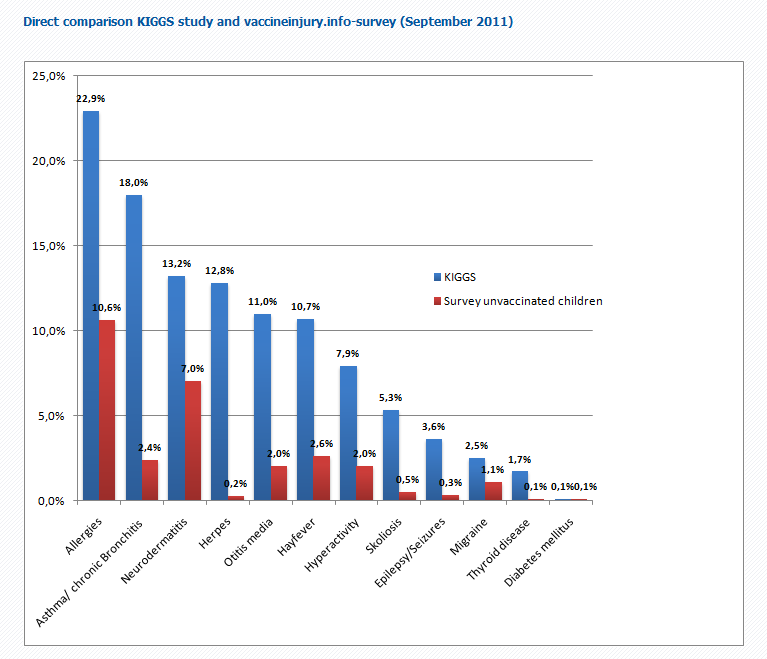 12. Certain children appear to have a higher risk for developing chronic brain and immune system dysfunction including autism, than others, if their immune systems are more easily “primed.” All it takes is the insult of ONE more vaccine, or ONE more infection, and the stage is set for regression into autism, development other neuroimmune disorders like ADD/ADHD and seizures, and a variety of autoimmune disorders including allergies (food and environmental), asthma, and ezcema.

13. The mainstream vaccine info is given to the public by extremely biased means. Media outlets have main sponsors who are pharmaceutical companies. The US and New Zealand are the only countries in the world who allow pharmaceutical companies to advertise their products on TV. Most pediatricians get their info from pharmaceutical reps who make money from doctors buying their products. Most doctors don’t even know what ingredients are in vaccines, and what side-effects or reactions are possible when they are injected into the body. Government agencies (CDC, FDA, & AMA) have monetary ties to drug companies and blatant conflicts of interest. For example, GlaxoSmithKline and Pfizer are owned by the same financial institutions and groups that own Time Warner (CNN, HBO etc.) and General Electric (NBC, Comcast, Universal Pictures etc.). This is seen throughout all of the major vaccine manufacturers and all of the 6 corporations that control our mainstream media. Keep in mind that these are the major funders of all ‘medical research’ that’s used to administer drugs and vaccinations.

Definition of SIDS: Sudden infant death syndrome (SIDS) is the unexpected, sudden death of a child under age 1 in which an autopsy does not show an explainable cause of death.

In a scientific study of SIDS, episodes of apnea (cessation of breathing) and hypopnea (abnormally shallow breathing) were measured before and after DPT vaccinations. “Cotwatch” (a precise breathing monitor) was used, and the computer printouts it generated were analyzed. The data clearly shows that vaccination caused an extraordinary increase in episodes where breathing either nearly ceased or stopped completely. These episodes continued for months following vaccinations. The study concluded that “vaccination is the single most prevalent and most preventable cause of infant deaths.” (source)

In another study, a pediatric neurologist looked at over 200 randomly selected SIDS cases, and in the preliminary data, on the first 70 cases studied, showed that two-thirds had been vaccinated within three weeks of death. He also established that there were ever increasing numbers of deaths with the increasing interval from the injection.

“Diphtheria-pertussis-tetanus (DPT) immunization: a potential cause of the Sudden Infant Death Syndrome (SIDS)”

In the 70s-80s, when Japan delayed all vaccinations until age 2, the SIDS rate dropped by 96%.

Things to do if wounded to avoid contracting tetanus:

If infected with measles and not vaccinated – to lower mortality risk:

CNN on the Measley Measles: http://thevaccinemachine.blogspot.com/2013/09/cnn-on-measly-measles-more-fiction-than.html

Note regarding the Chickenpox vaccine:

A British former surgeon and medical researcher, known for his 1998 research paper in support of the claim that there is a link between the administration of the measles, mumps and rubella (MMR) vaccine, and the appearance of autism and bowel disease. Wakefield’s study and public recommendations against the use of the combined MMR vaccine were linked to a steep decline in vaccination rates in the United Kingdom, and he is now subsequently barred from practicing medicine in the UK. Wakefield has been working to exonerate himself of the charges – because he has actual proof against it. His partner already has been exonerated.

His research is supported by other studies:

POUL THORSEN (head of the panel “disproving” Dr. Wakefield’s research) is currently a wanted fugitive in the U.S. He is the researcher who authored 21 of the 24 government studies that the CDC says prove vaccines don’t cause autism. He stole over $1 million dollars of the research money (U.S. tax dollars), was indicted on 22 counts of Wire Fraud & Money laundering, committed forgery, purchased a new home, a Harley, an Audi, an SUV, and fled the country — yet the CDC continues to base their claim of no link on his research.

Evidence of parallels between mercury intoxication and the brain pathology in autism: http://www.ane.pl/linkout.php?pii=7212

The following peer-reviewed papers support the findings of the original work by Wakefield and colleagues at the Royal Free Hospital in the UK: http://www.ageofautism.com/2010/05/peer-reviewed-papers-support-findings.html

We Need to Talk: http://youtu.be/psG-6CMjccs

Vaccines: The Risks, The Benefits, The Choices: http://youtu.be/pdLMeULoujM

Do Vaccines Cause Autism? http://youtu.be/xv_IaLHwgAQ

Autism made in the USA Vaccines, Heavy Metals, and Toxins are causing the epidemic of autism: http://youtu.be/smywi4NjigU

Shots In the Dark: Silence of Vaccine: http://youtu.be/pnxAsrAK2hw

Truth About Vaccinations (Part 1 of 4): http://youtu.be/JbNRdx1_7aU

Austism, Vaccines, Mercury and the Culpability of AAP: http://youtu.be/36_qz2beMaE

Why I choose not to vaccinate:

101 Reasons Not to Vaccinate: http://www.ias.org.nz/vaccination-2/101-reasons-to-not-vaccinate-part-1/

Vaccines, The Greatest Lie Ever Told (9 questions to ask): http://www.slideshare.net/Billdaddy/vaccines-4996996

What Is the Deadliest of All Vaccines According to the Data: http://mobile.dudamobile.com/site/preventdisease?url=http%3A%2F%2Fpreventdisease.com%2Fnews%2F13%2F111413_What-Is-Deadliest-Of-All-Vaccines-According-To-Data.shtml#2843

No Vaccines. Ever. For Anyone. Here’s Why: http://gaetacommunications.com/site/?p=1714

FDA Investigating Viruses in Cells Used to Make Vaccines; and Evaluating the Potential Threat Posed by Transmission of Viruses to Humans: http://www.fda.gov/biologicsbloodvaccines/scienceresearch/biologicsresearchareas/ucm127327.htm

7 Reasons You Should Refuse or Delay Vaccines: http://guggiedaly.blogspot.com/2011/07/7-reasons-you-should-refuse-or-delay.html

Vaccines for Children Not Effective: http://www.examiner.com/article/vaccines-for-children-not-effective

Why Do We Get Sick After Vaccination: http://www.renewamerica.com/columns/janak/110815